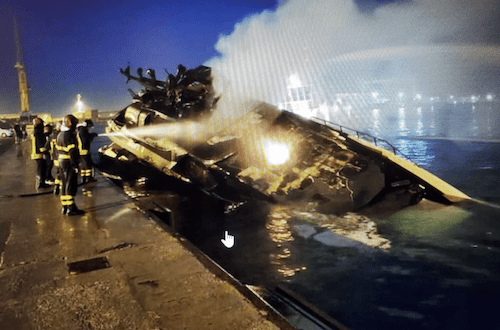 The Italian Sea Group is one of the largest Italian Yacht Builders incorporating the brands Admiral, Tecnomar and Tecnomar for Lamborghini are recently acquired by Italian design icon Giorgio Armani and Belgian entrepreneur Marc Coucke.

Hong Kong-based company TSIG Asia has apparently accused The Italian Sea Group S.p.A.(TISG) of massive fraud after the sale of several yachts. According to various duped parties, the Italian Sea Group systematically abuses its position and time and time again has not fulfilled its obligations within the agreements it enters into.

The company, is not new to controversy and has been frequently in the news after several superyachts spontaneously caught fire in both Italy, China, and Greece, resulting in serious effects to the owners and insurance companies alike.

An independent forensic financial investigation will have to determine how the company was able to finance its IPO, this being a mystery now that it has emerged that the company fairly recently had major liquidity problems.

The Italian Sea Groups scandalous behaviour in regards to employees, personnel not paid in full accusing the company of abusing position of power. Employees camping outside its headquarters in Marina di Carrara in protest after the company refused to enter into reasonable negotiations. The company would have employees working extremely long hours contravening employment directives and which the employees were not compensated for.

The case is reminiscent of Satyam, the Indian IT company where a major fraud came to light in 2009. That company turned out to have $1 billion more in bank balances on its books than there actually was.

The Italian Sea Group has been asked by parties to show the books so that the truth can be investigated now that it has become clear that various parties have united in a legal complaint. TISG Asia was unwilling to comment, stating only that it is awaiting the results of the investigation.